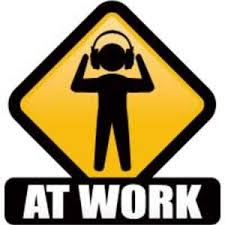 It would not consist of playing Xbox or watching movies; my ideal work day would consist of a lot of, well, work.

Of course this work day would take place at home, mostly in my office. I’d start off the day by working on my comic strip. I generally come up with ideas for it in the morning, and they are usually based on recent and past experiences. I’ve found that when I am working on this strip that I have some days where I’ll make 3 or 4 comics, and others where I am in a dry spell. Regardless, I would work on this strip for the first hour of my day. By the way, today I started putting this strips into PDF form, so that I can make an E book out of them later this year. Stay tuned!

One of the most crucial parts of being a comedian is writing. This is what I would do next, because often I make comics strips that could be turned into new material. It is only logical that I would spend time writing new jokes after working on my comic. I used to try to write with music in the background, or while watching Netflix. I always found myself simply listening to the “background” music, or watching Netflix, and not actually writing. I don’t need complete silence to write, occasional distractions can actually help me at times. Also, I don’t write my jokes out word for word. I’ll generally write the premise in as few words as possible, and then have some bullet points of punchlines, and ideas to explore based on that premise. Additionally I have pages in my journal of premises to explore later, I love making these lists. Sometimes the ideas get forgotten, but sometimes when I’m having writer’s block I’ll look for one of these lists and force myself to flesh out one of those ideas.

At some point during the day I’d eat lunch. Generally when I’m on a roll with writing or whatever other comedic pursuit I’m into I don’t want to stop and eat. So who knows, this type of work day might help me lost a few pounds.

Another important part of the day would be spent reading articles about comedy. This is something that I try to do in moderation. I’ve learned that reading and talking about the way that other comedians have succeeded can actually be detrimental. For example, Louis CK has done a lot of amazing things by controlling the production of his tv show, selling his own tickets online, and self-releasing his own albums as of late. However, I’m not at a stage in my career where any of those things are relevant. It is great to read about them, but I refuse to let those things get in the way of my writing, performing, getting better, etc. I do like to read interviews of other comedians, studying the greats can have its benefits.

Obviously I enjoy creating things, and I enjoy writing. Something that I want to start doing is writing monologue jokes. You know, the ones that guys like Letterman and Conan deliver on a nightly basis. Those were all written by talented comedic minds. This requires not only quick wit and writing ability, but also a knowledge of current events. I’ve never had a ton of topical material in my act, because it has such a short shelf life, but I think that writing for late night would be amazing. I’m obviously not at that point yet, but writing dozens of topical jokes would be great practice. Creating writing samples would take place during this chunk of the day, sitcom scripts and various other relevant writings.

Lastly, I’d go out at night and work on my material. I don’t currently live in a place with stage time every night, but I do get up as much as I can. I am somewhat envious of comics who live in places where they can think of an idea in the morning, and ALWAYS be talking about that idea on stage that night (if they so choose). When I went to New York this summer I remember hitting 3 open mics in one night, it was amazing. I love the stage. Writing and creating things aside, doing actual stand-up is my passion, first and foremost. I ALWAYS write my ideas out by myself initially, but at least twice a week I’d love to meet with other creative minds who I trust and bounce ideas off each other.

During this ideal work day I may spend some time watching actual stand up too. I feel like I’m at a point where I’m comfortable on stage, I know what I’m doing. It is always good to watch people who are better than you, and have different styles. It keeps you hungry.

Did I mention that this workday would start around noon? Not because I’m lazy, but because I have a family that I’d spend my mornings with. Also, I’d probably be working late into the night (that’s when I’d be on stage), so starting at noon makes sense. Also, I’m not a morning person, so there’s that.